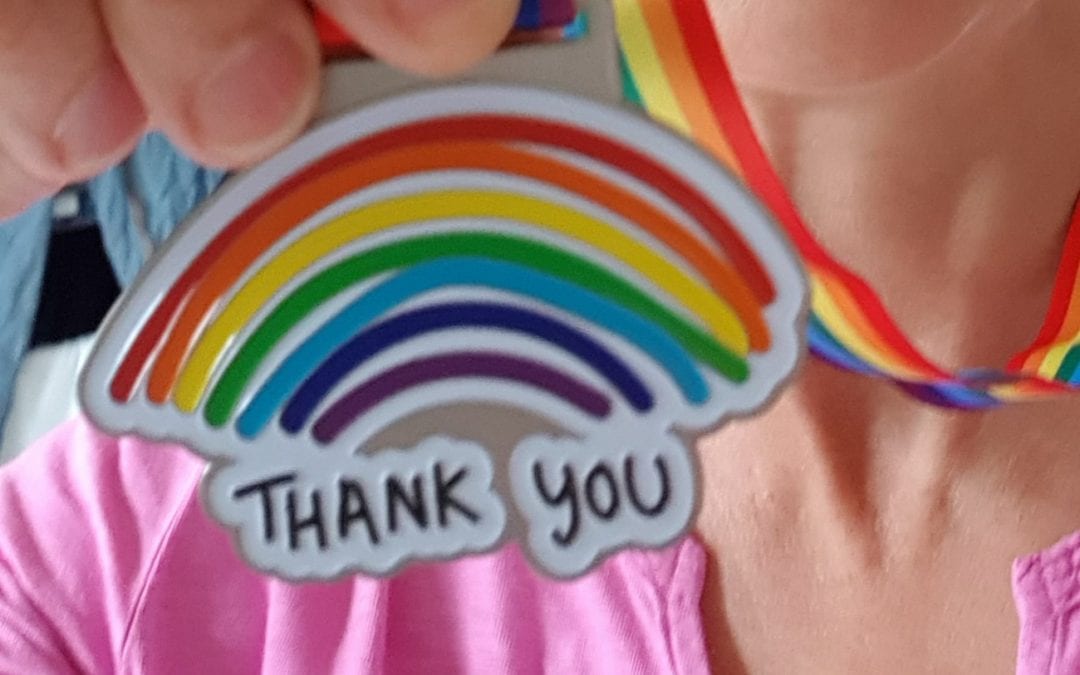 2020 has not been a great year for anyone but Wirksworth’s Tanya Rountree can tell us why in 2020 the running club made her smile.  Tanya was diagnosed with breast cancer in October 2019.  So for her, 2020 was about completing her treatment and then running the road to recovery.  The club asked Tanya if she’d be willing to share her story with us because we think that she is an inspiration to everyone.  Tanya wants the world to know that Wirksworth Running Club (WRC) is so much more than just a running club.  Here is her story:

Tonight, it is -1 degree in Wirksworth and the best running club in town have just run past me and made me smile.  It has made me smile many times over the last year.

We shared fizz on a Saturday morning in November 2019 to celebrate Brian Clement’s 200th parkrun.  Brian had chosen to run with WRC instead of his second love Crystal Palace, clearly WRC is the best running club in the North.

Simple acts of kindness have been given to me during a year of medical appointments; many club members asking “are you OK?”, sending me funny jokes, keeping me chatting online, popping around for socially distanced cups of tea, discussing anything from bread making to politics with a little bit of coronavirus chat, of course, and their absolute faith that I will be running again one day.  They have made me smile and got me through some tough days.  At one cold point I received a fleecy lined buff, sent via Northern Ireland, WRC is definitely the best running club in the UK.

One day, out of the blue, a beautiful bunch of flowers arrived from the club with some surprise treat money.  The card and money sat on my windowsill along with my thought bubble, “When I can run 5k again I will buy some new ONs trainers.  I will run like the Swiss in the mountains”.  WRC must be the best running club in Europe.

Wig advice from James Watson made me laugh out loud every time I put one on, Tina Turner songs in my head.  WRC is arguably the best transatlantic running club.

The club league was up and running through lockdown and it was brilliant to track how many points, especially the women, were racking up.  Our very own International fell runner, Claire Eardley even persuaded me that YOMP! 2021 might be a good idea, crazy considering I couldn’t walk beyond the kitchen at the time!  Honestly, WRC is the best running club in the world.

At an extremely low point I was joined in a daily challenge on Quiz Planet, determined to beat men’s team captain Bob King, Brian Clements and Stacy Newton.  I smiled daily as they threw their energies into beating me, often easily.  WRC is obviously the best running club in the galaxy!

These smiling moments are not really about running, but then again they are.  As lots of us know running is about much more than putting one foot in front of the other.  Without this club and support I might not have run through the treacle to get from couch to 5K (thanks for the medal), and even in my shiny new ONs, I wouldn’t have tackled the club league without John Potter’s encouragement and other club members’ endless patience, explaining where the routes are as I asked again “Can you help?  I’m not on Strava”!

I now run because I can.  I feel very lucky to be part of WRC and it has been even more important when not running than you can possibly realise.

Seriously, to the best running club.  Thank you x