Well, that was a fast one.

The gauntlet thrown down last month by Billy Cartwright when he took the T’Owd Man course record from Harry Holmes was picked up and returned with interest.  Rumour has it that Harry was a bit nervous looking at the entry list, Billy was there as well as Dan Howarth from Keswick plus a busload from Loughborough University Orienteering Club.

Harry, Billy and Dan all competed in the British Fell Relay Championships on Saturday where Harry was part of the victorious Pudsey and Bramley team, Dan finished 10th with Keswick and Billy finished 16th with Matlock.

Harry needn’t have worried, safe on his own territory he smashed his own course record and finished in an eye-watering 53 mins and 58s, a full 3 mins clear of Billy who took second by a single second after a sprint finish with Dan.  Loughborough University took 3 of the next 4 places and the first 7 all broke the hour mark.  There were only 6 times under the hour in the previous 7 runnings of this race. 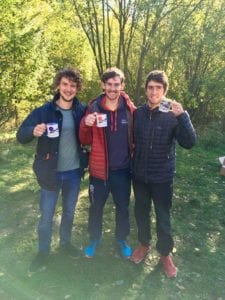 In the women’s event, Eleanor Lunt of Long Eaton took the win in 71 mins and 10s, a minute clear of Leah Williams of Loughborough University who was a further 3 1/2 minutes clear of local runner Emily Taylor.  The women’s record has now stood since 2014 at 66 mins and 26 seconds.

The age category winners were Mike Blair (V40), Malcolm Fowler (V50 – his 3rd victory in a row and another new record time) and Bob Foreman (V60, another category record).

For the women, Laetitia Moakes took the V40 title which is a correction from the provisional results (who’d have thought not everything on the internet is true!), Jane Crowson took V50 and Pat Goodall V60 in another age category best.

Full results can be found here.

That’s it for the Wirksworth Running Club races for 2018.  Hope to see you all for the Incline Race in April 2019.