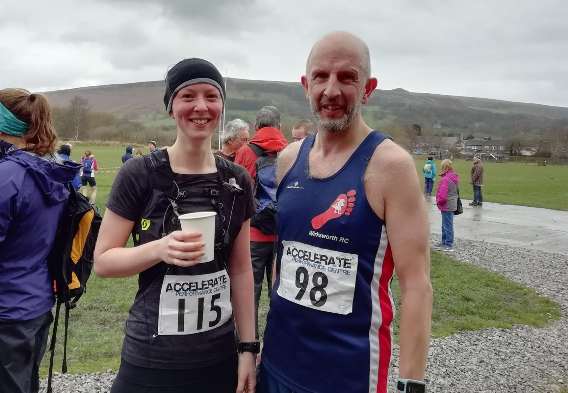 Sunday 3rd March was the fantastic annual Hope Winter Fell Race, a category ‘B Short’ race of 6.6 miles and approximately 1400 feet of ascent. The course winds up out of Hope Village and takes a 2-mile route up to the exhilarating summit of Win Hill, before dropping steeply down a tricky descent through heather and woodland. It then follows a trail high above Ladybower Reservoir before climbing back over Win Hill, then into an exciting descent of over two miles back to the village along paths and lanes. The route is repeated during the summer as Hope Wakes fell race, though run in the opposite direction.
Chris Gillott ran the race for the second time, finishing 87th in 1:04:56 (knocking around 90 secs off last year’s time), and Steph Solomon put in a solid run in her first appearance at  this race, to finish 128th in 1:11:46. The overall winner was Harry Holmes of Matlock AC in 43:36 (with MAC also taking 2nd and 3rd place). First female was Antonia Fan of Skyrac in 56:32. There were 188 runners.