Bollards, cartoon characters and whether she is now a runner… 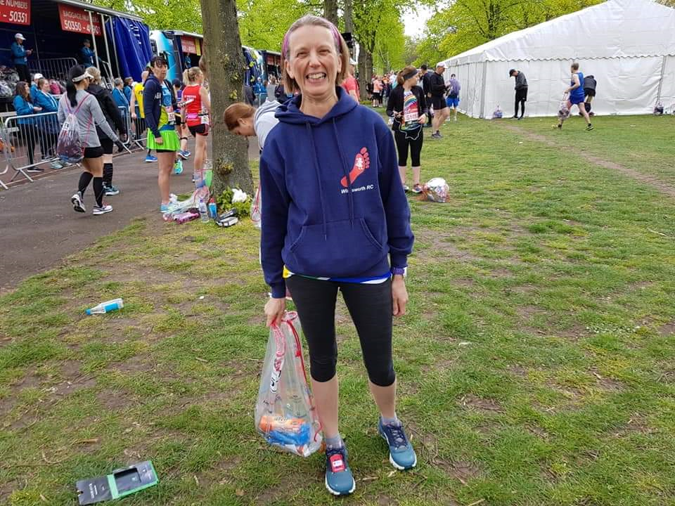 After an early breakfast with other runners eating silently porridge, bananas etc. I headed off at 7am on my great adventure.
First to London Bridge on the Tube…no need to worry there were signs everywhere, more free bananas and already I was in the red zone.

Then surrealism set in, the train smelt of Deep Heat, only the northerners were chatting, mainly about Big Ben being in the hotel lobby!
A 15 min walk up through the park should be the easiest bit if the day but typical me chatting away I walked into a bollard (always hated bollards) photo two is bruise today.

Oddly, I wasn’t nervous, had been for months but all good so took some photos for Wirksworth Running Club (important 10 Club League points riding on evidence of wearing hoody in public). 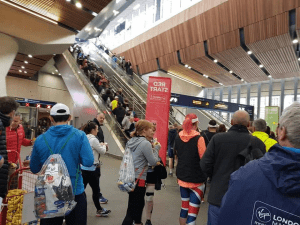 It dawned on me I’m in the last zone of the day to set off, 11 am ish! But great as no ‘runners’ so lots of costumes and ‘have a go heros’. The Pacers said 6-7 hrs so I knew I’d be passing a lot of people, better than being overtaken for hours!! So, I ran with Spiderman, passed Big Bird, The Wombles, a shoe, lots of rhinos, nice firemen, someone with a lung transplant, it was humbling. The crowds and noise were incredible, bands, of all cultures, choirs, DJs, bit of politics and unbelievably all along the route. There was one underpass of about 100m with nobody and suddenly everyone walked, stretched, did their shoes obvious that I wasn’t the only one which felt like it was a stage show.
The Cutty Sark made me cry, Tower Bridge not so much, I think I prefer the Tyne Bridge and Red Arrows.

Running was odd, my leg hurt from Mile 1, I was expecting something to hurt but probably around Mile 20 – so much for training! I felt okay for about 9/10 miles and kept telling myself to slow down, then stopped looking as I figured I was at a good pace.
There are two videos attached one at 13 (feeling good)

I had to run not walk, by this stage everyone was walking so it was dodgems, the blue line with the fastest route kept me going, well Mo (Farah) followed it, that and thinking this is once in a lifetime so run not walk, run not walk…suddenly after the longest 4 miles ever there were signs about 1k to go, I couldn’t believe it, 600m heard a WRC friend shout my name, felt ‘wow a really out of body experience’. I wanted to remember crossing the line so much but really it was just one more step then done. 5hrs 6minutes which is great spot my secret target as I spent the six mins in the loo queues, no bushes or hedges down south!! !! 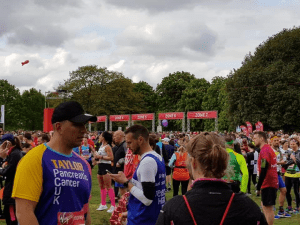 .
And that’s it, just one more step, honestly if I can do it anyone can, signing off from this amazing adventure, thankyou again to everyone you have been incredible, THANKYOU.

Love from
Tanya – the asthmatic ‘nearly 50’, working mum of two…does this mean I’m a runner?!”