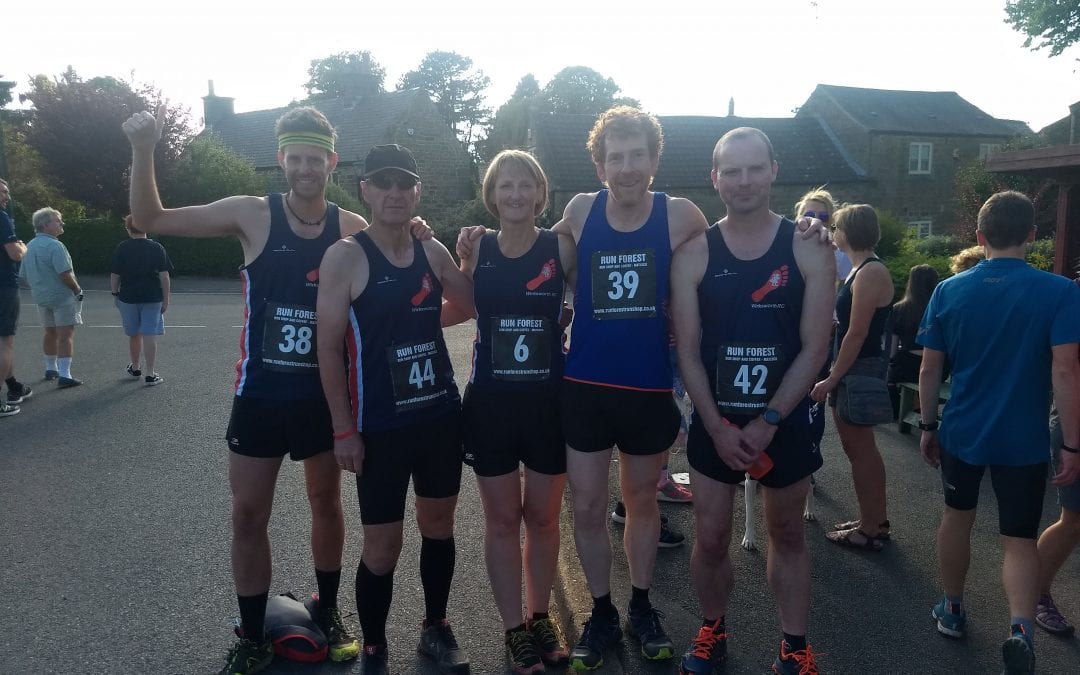 “Where’s Stacy?”
“Just what I was thinking. Even with his usual mincing through the rocks and tree roots he should be here by now.”
It was already a good 20 minutes since Mark and John had finished.
“Maybe something’s happened to him?”
“Yes it must have.”
“Let’s go to the pub then.”
“Yes let’s.”

And so John and Mark headed away from the finish line and down to the Black Swan, which did such a hospitable job of hosting the race registration and the post race rehydration for this fourth annual Ashover fell race.

Though beautiful, it was a worryingly warm evening for the race, which started in the middle of a field on the edge of the village. Brian got sent to the back of the starting pack, where he belongs, while John positioned himself on the front row, being in stunning form currently. Clare, Stacy and Mark took up their positions somewhere in the pack for the charge up the first of three hills. If you don’t know Ashover, and as one of those lucky little villages that isn’t on the way to anywhere in particular many of us don’t, it has a series of Victorian subway tunnels on the path up the hill. Built by the owners of Eastwood Grange they were intended to shield the owners from bumping into the peasantry. Obviously they were no longer functioning properly and everyone had to mingle with Brian.

A smidgen under six miles, for most of us anyway, the race profile had three big climbs and descents and a smaller climb to the finish. On paper the 1,000ft climb doesn’t seem too bad over that distance but the sharp steepness in the woods and the clambering over big boulders sapped the energy levels while the heat sweated out any available fluids.

John had a decent edge on Mark for the first and biggest climb up Farhill but Mark overtook on the climb up the second and held on until the walking pace up the third allowed John to bridge the distance and take back the team lead with his youthful fitness and hold onto it with his speedy descent technique.

Those descents from the third hill were proper scary. In some parts super sharp drops down loose earth scattered with rocks and decorated with the telltale streaks of torn ground where others had skidded down before you. In others there was loose scree with a channel down the centre, nothing to get purchase on you just had to pray your choice of shoes would hold you and the runner behind you wasn’t going to clatter into you and take you down with them. Clare used her considerable fell descent experience to keep the pressure on her Long Eaton running partner Jo Lewis running her first fell race.

Brian meanwhile having summited Ashover Rock, known locally as The Fabrick, was in the unusual position of being ahead of Stacy who’d decided to ignore the industrial quantities of red and white tape and arrow signs covering the trees, gorse, rocks and shrubs of Hade Wood and head off down a road for a two mile detour of his own design. Meeting the traffic speeding down Slack Hill convinced Stacy there may be some navigation error afoot at which point he turned around and headed back towards the parish and his teammates leisurely enjoying a pint of delicious Farmers ale at the Swan.

Thanks to Luke, Mick, Wayne and all the Ripley crew for a smashing race in a lovely spot that I’d recommend anyone give a go next year.