A marathon success story to inspire us all 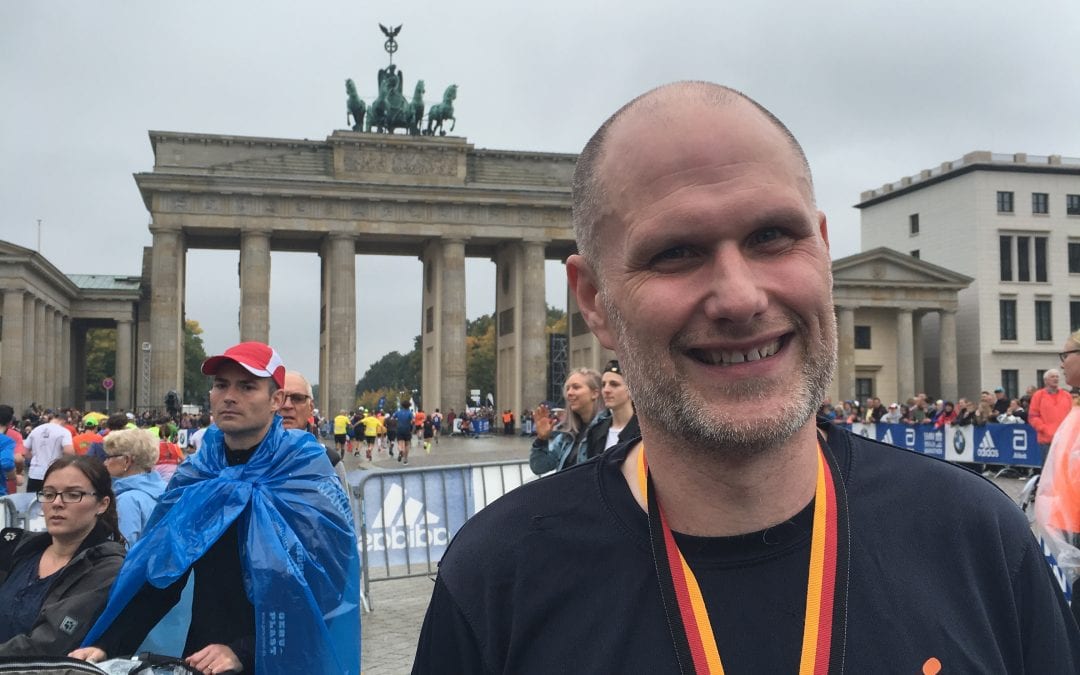 2019 was a rather special year for Wirksworth’s Peter Johnson, pictured by the Brandenburg gate, having just completed his 10th Berlin marathon and automatically enrolling him in the ‘Jubilee Club’.  We asked Peter to tell his story, surely an inspiration for anyone who wants to get into marathon running…

I started running at the start of 2009, having got a ballot place in the London Marathon.  I was 2 stone overweight and when I went out for the first time to try 3 miles, I was walking and wheezing after about half a mile of a flat Derby route!  After a lot of work, I got round London in my dream time of 3:58 and clearly the bug then set in. 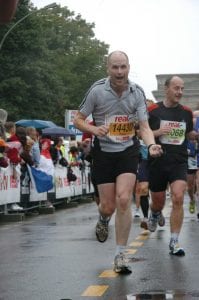 2010 was the first ‘wet’ marathon Berlin had ever had but Peter loves to be kept cool by the rain.

In 2010 I was getting competitive with myself and was looking for courses that might provide PBs and that’s where Berlin came in.  In those days, it only just sold out a few weeks beforehand, so getting a place was no problem.  I booked a flight and cheap hostel and off I went.  I instantly loved the place, the city, the race, everything about it.  I ran a PB by over 12 minutes in a time of 3:35, but was instantly annoyed that it hadn’t been under 3:30!

While I was at the Expo getting my number, I had noted something about a ‘Jubilee Club’ and when I investigated this, it turned out that anyone who completes 10 Berlin marathons gets a place in this club and are given a lifetime number with a guaranteed spot in the race each year.  Never one to set short-term goals, I decided this sounded like a great plan and therefore booked my place for 2011 as soon as I could!  The guaranteed spot would actually only become an issue as the race grew in popularity and had to introduce a ballot system somewhere around 2015.

2011 saw that sub-3:30 with a 3:25 and that year only cemented my determination to join the ‘Jubilee Club’.  Times kept falling until my lifetime PB in 2014 of 3:11 – which I’m very pleased was at my favourite race.  Sadly, despite this being the quickest, it was the most disappointing as I was blighted by injury and fell way short of the 3:05 I felt capable of at the time.  The times since haven’t been as strong, but I’ve been more pleased with the 2019 3:43 in some ways than I was in 2014!  Only the first and most recent have been slower that 3:30, but Berlin is great anyway!

So, although 2019 was the slowest time, crossing the line was the most important thing as it meant my place in the ‘Jubilee Club’ was finally assured, with an induction taking place just after the race – so no ballot stress for me for the 2020 edition!  Running through the iconic Brandenburg gate at the end was never more special, feeling that, after ten years, I’d definitely earned my place!